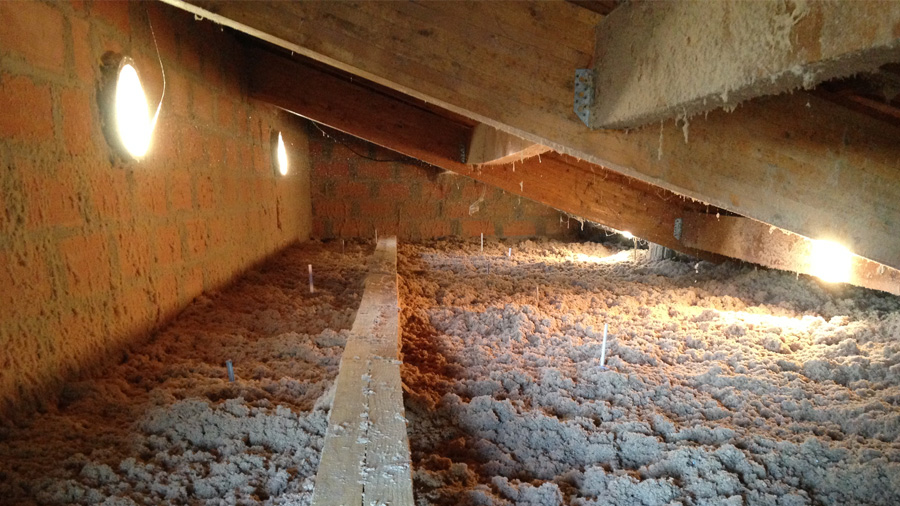 Thermal and acoustic insulation made of recycled paper, or cellulose wadding, is used in loose fill or in panels in buildings. A study initiated by a working group of industrial manufacturers with the CSTB explored to what extent the thickness of this loose fill insulation is subject to settling, over time. This is a major challenge in the context of energy transition. The goal is to assess this component's actual contribution to the energy performance of the building envelope.

Due to variations in temperature and humidity, loose fill insulation installed in unused roof space can undergo settling of its thickness over time. Because thermal resistance is proportional to thickness, the efficiency of the insulation decreases. This phenomenon must be taken into account when installing the insulation, in order to achieve the energy savings expected by the project owner. For loose fill cellulose wadding insulation, a classification based on conventional laboratory tests indicates the settling rate and thus enables installers to offset this natural phenomenon while complying with the rules for its use.

Several manufacturers of cellulose wadding came together in a working group led by the CSTB to analyze the relevance and robustness of conventional test methods for determining the settling of this kind of insulation material, currently defined in the European standard. The objective is to identify any difference with the actual settling of the insulation material once installed in the building, after a few years.

Initiated in October 2015, the work consisted of comparing the conventional values with the on-site settling measurements. The study began with a collection of data on already completed construction projects, and continued with analyses until December 2016. The feedback from the field, compiled by the CSTB, showed the order of magnitude of the difference with the laboratory measurements.

The conclusion is that the topic requires further study with improved representativeness of the data across the entire country and over a significant period. A procedure is underway in 2017 to determine a common on-site measurement protocol. In parallel, a study will be conducted of the sensitivity of the laboratory method.

SIMI 2019: The CSTB Group guides you in all phases of your construction or urban development

Behind the scenes at the Silver BIM Awards 2018: the Jardins de l'Arche Tower in La Défense with the CSTB